French Prime Minister Jean Castex has said he expects further lockdowns across France as coronavirus infections continue to surge and has recommended the French to limit their social life.

There would be no relaxation of Covid-19 measures anytime soon, Prime Minister Jean Castex said while speaking to the franceinfo news channel on Monday morning.

Castex took the opportunity to echo the words of the health Minister, Olivier Veran, reinforcing the seriousness of the situation and urging people not to have multiple dinner parties and regulate their own homes.

The reality of the second wave is here… there can be no more slackening.

Castex highlighted the likelihood of further local lockdowns until the end of year at the least, with Montpellier and Toulouse becoming ‘maximum alert’ zones from midnight on Tuesday.

The two cities will be joining Paris, Marseille, Lille, Lyon, Grenoble and Saint-Etienne that have been placed on the highest alert level earlier. The local lockdowns are set to last for 15 days before being reviewed. Meanwhile, Castex assured people that the government’s economic support would also be extended in line with local lockdown measures.

While Castex, who served as the mayor of a provincial town of 6,000 people before becoming PM in July, did not rule out countrywide lockdown measures, he claimed “generalized reconfinement” should be avoided at all cost.

Claiming that French people were premature in their consideration of the virus’s demise, the PM announced that France will get an updated ‘StopCovid’ tracing app on October 22, admitting the original app, which alerts people to possible Covid exposure, was not efficient.

Castex who had previously been criticized for not downloading the app himself, pledged he will download the updated one upon its release.

Protests and opposition to increased lockdown measures have been widespread across the country over the past month. On Monday, fairground and circus professionals, coach operators and taxi drivers began so-called ‘snail operations’ aimed to disrupt road traffic, around several major French cities.

In the last week, fresh restrictions announced in Paris and Marseille have seen residents taking to the streets to mourn the “death” of their restaurants and bars whilst the city administration of Marseille has even created its own scientific council to take back some control from Parisian lawmakers.

France is one of Europe’s hardest-hit countries, with at least 32,730 virus-related deaths. Over the weekend, health authorities reported about 43,000 new infections. 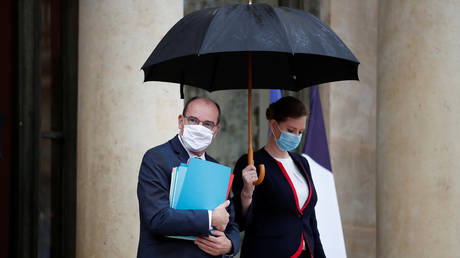