NASA’s Hubble Space Telescope has captured the spectacular death of a star 70 million light-years away in incredible detail, which will help measure the elusive expansion rate of the universe.

Hubble began observing the star, designated SN 2018gv, in February 2018, after an incredibly bright explosion was spotted in the area in January. In fact, the explosion was so bright it actually released as much as energy in a matter of days as our star does in a few billion years.

“No earthly fireworks display can compete with this supernova, captured in its fading glory by the Hubble Space Telescope,” said Nobel laureate Adam Riess, of the Space Telescope Science Institute (STScI) and Johns Hopkins University in Baltimore.

Hubble took snapshots of the spectacular scene, which have been painstakingly turned into a video.

The time-lapse film, which spans almost a full year, showcases a Type Ia supernova in the spiral galaxy NGC 2525.

The explosion was caused by a white dwarf star which reached critical mass by ripping away material from its binary star partner, becoming hot enough to initiate nuclear fusion and essentially transforming itself into an immensely powerful atomic bomb.

The critical mass of these stars is clearly defined within a certain range, meaning these types of supernovae have a pre-determined brightness which can be incredibly useful to cosmologists.

For this reason, these supernovae are known as ‘standard candles’, as they are used to calculate distances in the darkness of space, as observers measure how the brightness fades over time.

By measuring how far away these celestial bodies are we can determine certain properties of the space around them, such as its rough chemical composition and the brightness of the surrounding galaxy.

When it comes online, the James Webb Space Telescope will be able to see even further than Hubble and hopefully catch more spectacular celestial fireworks. The next-generation probe is set for launch in October 2021. 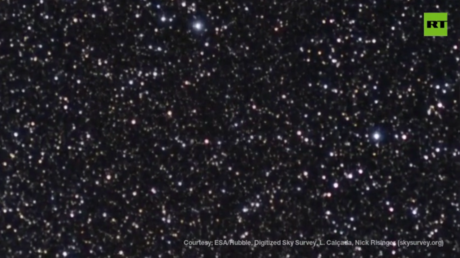