India is the prime suspect behind a terrorist attack that targeted Pakistan’s Karachi Stock Exchange, Prime Minister Imran Khan has alleged. New Delhi has strongly denied having any role in the incident.

Speaking before the National Assembly on Tuesday, Khan asserted that the gunmen who stormed the facility were linked to Pakistan’s longtime rival.

“We have no doubt this was done by India,” he stated as cited by local media, adding that the three security guards who lost their lives in the attack were “heroes” and “thwarted a major incident, which was planned by India to destabilize us.”

“Pakistan cannot shift blame on India for its domestic problems,” the ministry said, according to Indian media. “Unlike Pakistan, India has no hesitation in condemning terrorism anywhere in the world, including in Karachi.”

Four militants dressed as off-duty police officers drove to a parking lot in front of the stock exchange on Monday. After throwing a grenade, a fierce firefight ensued, resulting in all four gunmen being killed by security forces. 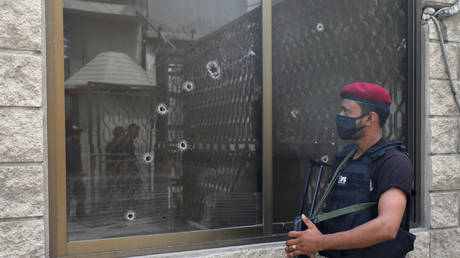