‘No colonialist power or threat’ can deter Turkey’s operations in E. Mediterranean – Erdogan

‘No colonialist power or threat’ can deter Turkey’s operations in E. Mediterranean – Erdogan

President Recep Tayyip Erdogan has said Turkey will continue seeking natural resources in the eastern Mediterranean despite any threats. Ankara also expects actors in the region to take steps to de-escalate tensions.

Turkey is locked in a dispute with Greece and Cyprus over overlapping claims to areas potentially rich in resources. Ankara has sent two survey vessels to areas claimed by the three countries.

Cyprus said on Tuesday it was willing to engage with all its neighbors on defining maritime boundaries.

“Turkey is determined to seek its rights in the eastern Mediterranean until the end,” Erdogan said in a speech in Ankara. “No colonialist power or threat can deter our country from the oil and natural gas resources believed to be in the region.”

However, the Turkish leader added that Ankara wanted to solve the dispute through dialogue and diplomacy, rather than escalating tensions.

The French military conducted training exercises with Greek forces off the southern island of Crete on Thursday, Reuters quoted defense sources as saying on August 13.

Thursday’s exercise was seen as the first manifestation of President Emmanuel Macron’s commitment to temporarily reinforce France’s presence in the eastern Mediterranean. Paris has called on Turkey to halt oil and gas exploration in disputed waters. 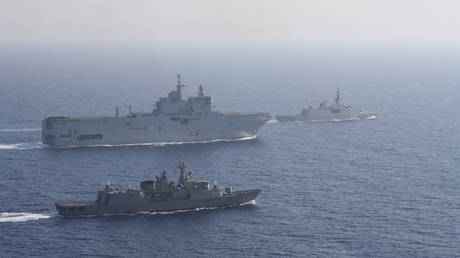 What is a Black Moon and what does...