Rescue teams were called in after an explosion and a fire were reported inside an underground facility at a hydroelectric dam in India. Nine people are believed to be trapped inside.

According to local media, a fire broke out inside an underground power plant at the Srisailam Dam in Telangana State on Thursday night.

Videos from the scene show engineers with fire extinguishers rushing to put out a bright blaze raging on one of the power units.

major fire🔥broke out in the hydel power station on the left canal of #Srisailam #Telangana. Rescue operations are underway 10rescued,9people stuck on the lwr floor of the power house
Prayers for the team trapped. hope they r safe..@PawanKalyan @JanaSenaParty @Cbn_Kota pic.twitter.com/nvCeEtvhwP

Initial reports say that a short circuit may have caused the fire.

A total of 10 people have been rescued, six of whom were hospitalized.

Telangana Energy Minister Guntakandla Jagadish Reddy said that nine people are still trapped inside, while rescue efforts are being hampered by thick smoke in the facility. 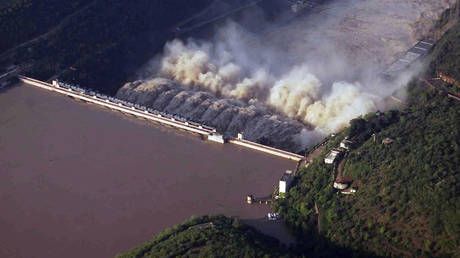