Close
Trending News
HomeWorld‘Nightmare scenario is out the window’: Moderna CEO says vaccine could offer Covid protection for a ‘couple of years’

‘Nightmare scenario is out the window’: Moderna CEO says vaccine could offer Covid protection for a ‘couple of years’

‘Nightmare scenario is out the window’: Moderna CEO says vaccine could offer Covid protection for a ‘couple of years’

The boss of biotech company Moderna has claimed that the “nightmare” worst-case scenario in which a Covid-19 vaccine will only offer protection against illness for a few months is not something we need to worry about anymore.

“The antibody decay generated by the vaccine in humans goes down very slowly… We believe there will be protection potentially for a couple of years,” said Moderna CEO Stephane Bancel at an online event on Thursday.

“The nightmare scenario that was described in the media in the spring with a vaccine only working a month or two is, I think, out of the window,” he added.

The Moderna boss continued on to note, however, there may be challenges among the elderly as their immunity is unlikely to last as long as other demographics.

Speaking on Tuesday, Bancel said he was confident that the company’s Covid-19 vaccine was effective against new, more contagious, strains found in the UK and South Africa.

Should it mutate even further, the current vaccine could be quickly redeveloped to encompass other new strains and mixed with the existing jab as a kind of inoculation ‘cocktail’.

The US biotech company received approval for its shot from the EU medicines regulator and the European Commission on Wednesday.

A number of medical professionals have expressed concern that the new variants of the virus will reduce the efficacy of recently-approved vaccines.

In December, BioNTech CEO Ugur Sahin said the scientific community is confident that the Pfizer/BioNTech vaccine will still be effective against the new strain of Covid-19 identified in the UK.

If this wasn’t the case, he added that his company would be able to create a mutation-beating vaccine in just six weeks. 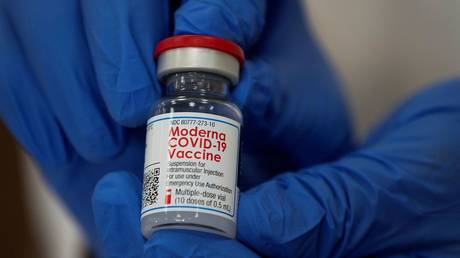 Hundreds forced to evacuate as Ind...