Tehran has built multiple “missile cities,” both ashore and offshore, along its southern coast, Iran’s Revolutionary Guards (IRGC) navy chief has revealed, calling the facilities a “nightmare” for the country’s enemies.

“Iran has established underground onshore and offshore missile cities all along the coasts of the Persian Gulf and the Gulf of Oman, which would be a nightmare for Iran’s enemies,” Tangsiri stated.

The IRGC is now present “everywhere” in these waters – its navy has mobilized 23,000 service personnel and 428 flotillas along the southern borders, the admiral added. Tangsiri also hinted at forthcoming long-range missiles, as well as brand-new military vessels “beyond the imagination” of the country’s enemies.

Iran’s elite Guards Corps certainly has a thing for subterranean facilities, and repeatedly intimated that it has well-hidden missile stockpiles and launch sites, and even fully fledged underground factories. So far, no visual evidence of the IRGC navy-operated compounds has been made available.

The Persian Gulf has seen an increase in foreign military since last summer, following a series of maritime incidents, including mysterious attacks on oil tankers. The likes of the US and the UK were quick to blame Iran for these incidents, but Tehran denied the allegations, pointing to the lack of evidence. Washington, in particular, deployed additional forces to the area to ensure “safe” navigation.

Iran, for its part, has always maintained that it’s capable of single-handedly providing all the necessary security in the region, and urged foreign nations to stay away from the troubled waters. 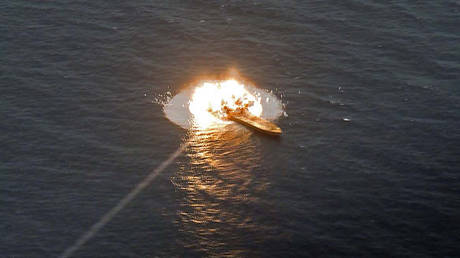