Bursts of radio and X-ray activity from a star with an extremely powerful magnetic field may have handed astronomers a fresh clue in unravelling the mystery of ‘fast radio burst’ signals from outer space.

The puzzling phenomena of fast radio bursts have left astronomers scratching their heads since they were first discovered in 2007. The bizarre blasts can emit as much power as 500 million suns but they last only a few milliseconds and arrive without any warning.

A widely-held explanation for the fascinating signals remains elusive. Because of their remarkable brightness, some experts believe they must be produced by incredibly powerful events.

New observations have found that bursts of radio emission from a magnetar – a neutron star with an extremely powerful magnetic field – 16,700 light-years away bears striking similarities with bursts that were detected from a magnetar within our own galaxy – known as  SGR 1935+2154 – earlier this year.

The signals from the distant magnetar – which goes by the snappy name 1E 1547.0-5408 – falls outside the previous interpretation of a fast radio burst, so scientists had to broaden the definition.

“The new discoveries both on SGR 1935+2154 and 1E 1547.0-5408 have changed the FRB definition itself,” one of the researchers, Gianluca Israel of the Astronomical Observatory of Rome, told ScienceAlert.

“The emergent scenario is that of a continuum of radio burst properties and energies, filling the empty gap between giant pulses in ‘ordinary’ radio pulsars and Fast Radio Bursts.”

The scientists hope their observations will help finally crack what exactly is causing the strange astrophysical phenomena, about which remarkably little is still known.

“All discoveries go in the same direction: they deepen our understanding of nature and the Universe,” Israel added.

The leading theory suggests that the bursts are caused by cataclysmic events like the collision of very dense objects, such as black holes or neutron stars. However, others have offered even more outlandish explanations. One study even proposed that they might be powering ‘solar sails’ on a colossal alien spacecraft. 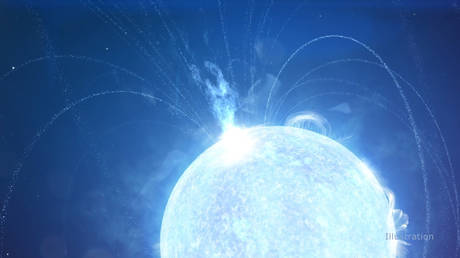