New Zealand’s largest city Auckland will remain in lockdown for two more weeks despite the mounting decline in coronavirus cases, while the health ministry reported the country’s first death linked to the Pfizer-BioNTech vaccine.

Only 53 new Covid-19 infections were reported in New Zealand on Monday, 30 less than on Sunday and the lowest figure in the last five days, according to the Ministry of Health.

But Prime Minister Jacinda Ardern insisted that it was too early to celebrate, saying: “I’m not making any judgment from today’s numbers, I’ll look at tomorrow’s and the next day’s and we’ll see what trend emerges.”

Ardern announced that 1.7 million residents in Auckland will remain under strict Level-4 lockdown for another 14 days, to prevent the resurgence of the virus.

The Level-4 lockdown rules forbid people from leaving their homes without essential reasons, with all gatherings banned and public facilities, including schools, shut down. Only supermarkets, medical facilities and petrol stations are allowed to operate.

Meanwhile, Covid-19 curbs have been slightly relaxed for the rest of the country, which has been shifted to Level-3 lockdown, the PM added.

New Zealand remained coronavirus-free for most of the pandemic, but the island nation has introduced harsh stay-at-home orders in mid-August due to an outbreak of the Delta variant, which saw daily cases spiking at over 560.

Also on Monday, the Minsitry of Health reported what is believed to be the New Zealand’s first death potentially related to the Pfizer vaccine against the coronavirus.

A woman of unspecified age, who had recently been inoculated with the US-made jab, has died of myocarditis, or inflammation of the heart muscle, which is known as a rare side effect of the Pfizer vaccine, the ministry said.

The information was made public after the case was reviewed by an independent Covid-19 vaccine safety monitoring board.

However, Director General of Health Ashley Bloomfield insisted that the risk of suffering myocarditis from the vaccine was still a lot lower than getting it after being infected with Covid-19. “That’s part of the reason we’ve been very open about this case,” she said.

The vaccination drive in New Zealand has gotten off to a slow start, with only 21% of its population of 5.1 million people getting both shots of the jab so far. 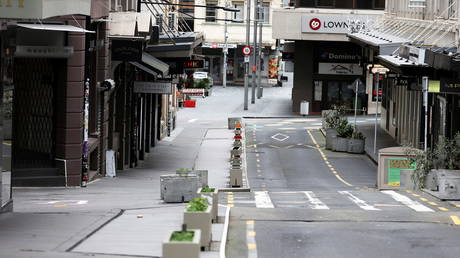