Physicists have said that they have proven, by analyzing gravitational waves from space, a theory developed by Stephen Hawking in the 1970s, which states that black holes cannot decrease in surface area over time.

In a study published on Monday, scientists from Massachusetts Institute of Technology (MIT) and Cornell University shared their findings from a research project which analyzed ripples in spacetime created by two black holes that spiraled inward and eventually merged into one bigger black hole.

The ripples studied were the first gravitational waves ever identified, detected by the Advanced Laser Interferometer Gravitational-Wave Observatory in 2015.

Splitting the gravitational wave data into time segments before and after the black holes merged, the researchers calculated the surface areas of the black holes in both periods.

The physicists found that the surface area of the new black hole was actually greater than the two initial black holes combined. The finding confirms a prediction made by famed scientist, Stephen Hawking, in the 1970s, in which he stated that black holes cannot decrease in surface area as it mirrored a rule in physics, that entropy or disorder can’t decrease over time.

Hawking’s law states that the surface area of the black hole won’t increase on its own, but when things enter it, it gains mass and correspondingly its surface area increases.

While incoming objects can make the black hole spin, which decreases surface area, the size increase due to the additional mass will always be greater than the size lost to spinning.

“It’s the first time that we can put a number on this,” said Maximiliano Isi of MIT.

The premise was also born out of Albert Einstein’s general theory of relativity which describes the physics and relationship behind black holes and gravitational waves. 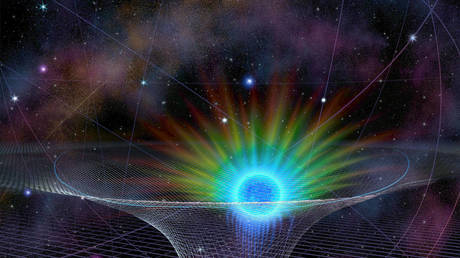