Netherlands to cull 48,000 chickens after ANOTHER bird flu outbreak

Netherlands to cull 48,000 chickens after ANOTHER bird flu outbreak

The Dutch government has ordered the culling of a further 48,000 chickens after an outbreak of highly infectious bird flu was detected – the second such incident in less than a week.

Health officials said on Tuesday that an outbreak of the H5N8 strain of bird flu had been discovered at a chicken farm in the village of Lutjegast, in the northern province of Groningen.

A local transport ban on products including poultry and eggs has been placed on farms within a 10km radius of the affected site by the Minister of Agriculture and Deputy Dutch PM Carola Schouten.

It comes after the Netherlands, Europe’s largest exporter of chicken meat and eggs, ordered some 215,000 chickens to be slaughtered on November 5, following a bird flu outbreak at a farm in the eastern town of Puiflijk near the German border.

Also on Tuesday, German authorities in the northern state of Schleswig-Holstein ordered that poultry there be kept indoors, after outbreaks on two farms in the region.

British health officials have meanwhile called for some 13,500 chickens to be culled in the northwestern county of Cheshire, where a bird flu outbreak was detected.

In the Netherlands, commercially farmed poultry must be kept indoors in line with the current national measures to tackle bird flu. In addition, zoos, animal sanctuaries, and bird owners are required to “shield” poultry and waterfowl, so the animals do not have contact with wild waterfowl or their droppings. 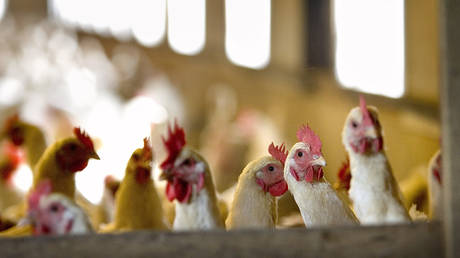