Nestle is jumping on the brand-cancelling bandwagon and renaming its Red Skins and Chicos candy products because it says they have “overtones which are out of step” with its values, prompting trolling on social media.

The global food and drink company explained in a statement that it is changing the names of its Red Skins and Chicos confectionery brands to ensure Nestle doesn’t “marginalise friends, neighbours or colleagues.” The company said it hasn’t got new names finalized yet, but that it would “move quickly” to make the change.

Red Skins and Chicos set to be renamed by Nestlé citing overtones out of step with their values. 🍬@SBSNews pic.twitter.com/58xl9Sq8Pz

‘Red Skins’ is a term to describe Native Americans, while Chicos, meaning ‘boys’ in Spanish, is perceived by some as derogatory to Latin Americans. The Red Skins packaging originally featured a cartoon Native American, but it was removed in the 1990’s.

Following Nestle’s announcement, many social media users trolled the brand by pointing to the corporation’s more problematic “values,” such as its history of hoarding water and marketing its formula to poor people in developing countries with no access to clean water to make the costly breast milk replacement.

One Twitter user suggested Chicos be renamed: “water is a human right after all,” while others were surprised to see “Nestle and values in the same sentence,” and questioned whether it was referring to its values that see it “committing grand-scale human rights violations abroad.”

Would those be the same values that have them consistently cited for breaching the International Code of Marketing of Breastmilk Substitutes?
Changing the names of a couple of products isn’t gonna hurt their profits.
Complying with the ICMBS will.

This is the same progressive company which thought encouraging marginalised women in poorer countries with putrid water supplies to feed their babies formula was a genius markerting strategy…isnt it?

Red Skins and Chicos, which are sold in Australia and produced by Allen’s Lollies, follow the likes of PepsiCo’s Aunt Jemima, Mars’ Uncle Ben and other well known brand mascots to land on the scrapheap in the wake of the Black Lives Matter protests that have erupted in the US and around the world following the killing of George Floyd by police in Minnesota, as corporations scramble to appear ‘woke’ and avoid being targeted as ‘racist’.

If Quaker can change its Aunt Jemima brand based on a racial stereotype, can @Nestle Australia please retire these #AllensLollies cringe-inducing racially insensitive brands? pic.twitter.com/3KYMyLrJ9F

Allen’s Lollies also released a statement saying that they are “all about creating smiles,” and that the decision “acknowledges the need to keep creating smiles.”

The corporations’ cullings of racial stereotypes have been met with mixed reviews, with many seeing the actions as virtue signalling and calculated efforts to appear woke, which will do nothing to actually combat racism, while others have applauded the discarding of outdated imagery. 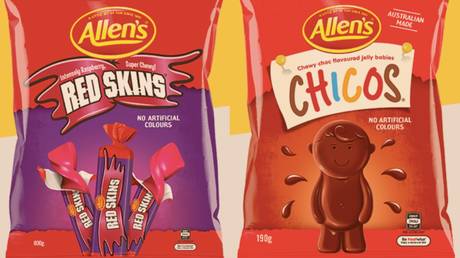