New Delhi’s mass antibody testing has found that almost 30 percent of those living in the Indian capital may have been infected with the coronavirus. The number eclipses that of the country’s overall Covid-19 tally.

“We found that 29.1 percent of the population of Delhi had antibodies, which means that they were infected and have been cured,” the capital city’s Health Minister Satyendar Jain told reporters on Thursday.

The serological survey studied as many as 15,000 people residing in New Delhi area and was conducted in the first week of August.

If confirmed by further testing, the number would eclipse the 155,000 cases officially recorded in the capital territory as of now. New Delhi’s estimated population currently stands at over 30 million, meaning that almost 10 million people could have been infected if the projection is correct.

India is in the top three of countries most affected by the coronavirus epidemic. The South Asian nation has reported 2.8 million active cases and 53,866 fatalities, according to Johns Hopkins University figures.

Studies suggesting that the global coronavirus tally may be far greater than the official figure have been published in several countries. In July, Iran’s President Hassan Rouhani has quoted an estimate claiming that “25 million Iranians have been infected with the coronavirus so far.” He added that “30 to 35 million people” are likely to be exposed to the disease in the coming months in Iran alone. 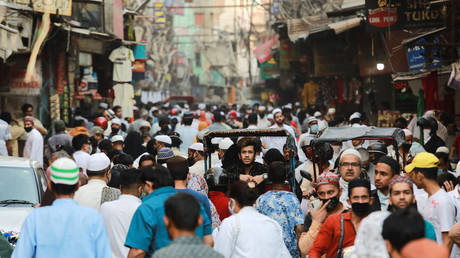 US imposes sanctions on Syrian mil...

China tells the US it has no right...