Nazis are VICTIMS of hate crime? Police launch probe into graffiti on monument to SS soldiers, Canadians stunned it even exists

Nazis are VICTIMS of hate crime? Police launch probe into graffiti on monument to SS soldiers, Canadians stunned it even exists

News that graffiti on a memorial to Nazi soldiers is being treated as a “hate crime” has stunned many Canadians, who were not only baffled by the police’s logic but also seemingly unaware that their country hosted such a monument.

The object in question, which was erected for Ukrainian nationalists who fought for the Nazis as part of the infamous 1st Galician Division of the SS during World War II, had been defaced in late June.

Located at the Saint Volodymyr Ukrainian Cemetery in Oakville, Ontario, the cenotaph reportedly had the words “Nazi war monument” painted on it some weeks ago – pretty accurately describing the essence of this particular memorial.

A hate crime investigation into the incident was launched by the police several days later. Law enforcement opted against releasing photos of the graffiti to the public to prevent “further spreading” of the message. Moss Robeson, a researcher writing about the actions of the Ukrainian Nazi collaborators in North America, was one of the first to notice the controversial probe and post about it on Twitter earlier this month.

Police in Ontario are investigating some recent vandalism at a local cemetery as a “hate motivated offense” but not releasing images “to prevent further spreading of the suspect’s message”—that this memorial for the Galician (🇺🇦) Division of the Waffen-SS is a “Nazi War Monument” pic.twitter.com/d3TgAhvFUF

News of the so-called hate crime only caught national attention this week after an article about it appeared in the Ottawa Citizen newspaper. Reporters for the paper asked the Halton Regional Police for an explanation as to how exactly members of the Nazi SS can be the subject of a hate crime.

“This incident occurred to a monument and the graffiti appeared to target an identifiable group,” police spokesman Constable Steve Elms told the paper in an e-mailed response. Elms cited a section of the Canadian Criminal Code, stating that communicating statements in any public place which incite hatred against any identifiable group could lead to a prison term of up to two years.

For some reason, it didn’t matter to the police that the “identifiable group” in this case were the fighters from the Galician Division. The Nazis assembled the unit in 1943 when it became clear that the Soviet Union was gaining the upper hand in the war.

News of the incident stunned Canadians, who expressed their bafflement on social media, with many wondering why there is a monument to SS troops in their country at all in 2020.

Why would Oakville Ontario allow a nazi SS monument to exist in it’s city? Why would Ontario’s govt allow a statue celebrating genocidal sociopaths who fought against Canadian troops? How many nazi’s live in #Oakville? #onpoli https://t.co/8v6oUTjgiT

I have more questions than I can count… the top two being how is there a monument commemorating literal Nazis in Oakville and how can defacing it by spray painting it with a literal description of what it is, a “nazi war monument” be a hate crime?! https://t.co/wgCnM93WFa

Some commenters argued that the monument to the Galician Division was itself a hate crime and called for it to be torn down.

While Canadians might have been shocked to discover the existence of the monument, the Russian Embassy in Ottawa had actually warned them about this and some other Nazi memorials in the country back in 2017.

There are monumets to Nazi collaborators in Canada and nobody is doing anything about it. #NeverForget #Holocaust #WorldWar2 pic.twitter.com/ANQ0FBk9k9

Some 80,000 volunteers from the Ukrainian region of Galicia pledged allegiance to Adolf Hitler during the war. They participated in brutal anti-guerilla operations across Poland and Soviet Ukraine, being blamed for atrocities against the Jewish and Polish civilian populations.

The Galician Division was crushed by the Red Army in July 1944, but the remaining troops swiftly rebranded themselves as the Ukrainian National Army. They surrendered to the Western Allies after the fall of Berlin on May 9, 1945, but many managed to flee abroad – including to North America.

Bernie Farber of the Canadian Anti-Hate Network advised the Halton Regional Police to better educate themselves on what a hate crime really is.

“Yes, it’s destruction of property for sure. But a hate crime? Far from it,” he told the paper when asked about the graffiti. 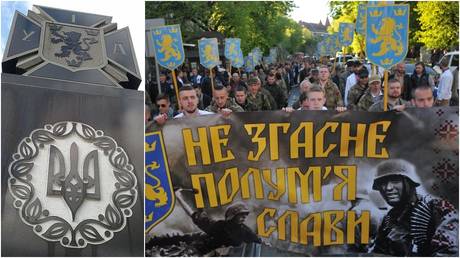