NATO boasts about own expansion in attempt at Twitter meme, prompting online war in replies

NATO boasts about own expansion in attempt at Twitter meme, prompting online war in replies

A NATO attempt to channel a cutesy Twitter meme sparked fighting in the replies, from calls to kick out Turkey and hopes for expansion in Ukraine, Georgia and the Balkans, to another warfront between Armenia and Azerbaijan.

On Monday, NATO posted the flags of its original 1949 members alongside the greatly expanded membership of today, hopping onto the three-week-old “How it started vs. How it’s going” meme train.

How it started How it’s going

The replies quickly became a virtual bloodbath, however. Among the most numerous were calls to kick out Turkey.

“Quite a success, having Turkey on board”… “Yeah, that country is a keeper”… “They definitely would never make trouble,” read some of the takes. Others simply featured the original meme with the Turkish flag crossed out.

And how it should be… pic.twitter.com/2qzvbY38KM

Ankara has drawn the ire of the bloc’s allies for unilateral actions in Syria and Libya over the past year alone, not to mention intense diplomatic conflict with supposed NATO ally Greece in eastern Mediterranean. President Recep Tayyip Erdogan also offered full-throated support to Azerbaijan, in the conflict with ethnic Armenians over the disputed region of Nagorno-Karabakh which flared up last month.

While the tenuous ceasefire negotiated in Moscow may or may not be holding on the ground, it was definitely full Azerbaijani-Armenian war in NATO replies, however:

Greece has the S-300 gun. Karabakh belongs to Azerbaijan, as all countries agree.

There were also those hoping to expand the alliance to Ukraine and Belarus (!), as well as Georgia. Some users from Ukraine, Bosnia-Herzegovina and “Kosovo” also clamored for membership.

let me in, please

One user even expressed the naive belief that NATO should just “add all the countries so they don’t do any wars with each other.”

Why don’t you just add all the countries so they don’t do any wars with each other? Seems like the sort of thing that might be good.

Comparisons ranged from Nazi Germany to the Soviet Union – while some just pointed out that NATO has really always been just the US and its hangers-on.

How it actually started pic.twitter.com/xqycMIuB4t

How it started How it’s going
🇺🇸 🇺🇸

The first Cold War military alliance to emerge – the Warsaw Pact came into existence six years later, in 1955 – NATO refused to dissolve after the end of the conflict. Instead, it began expanding its membership starting in 1999, while backing US military interventions in the Balkans, Libya and Afghanistan. 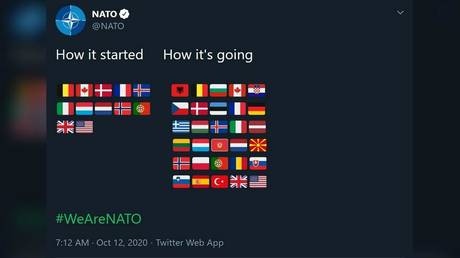