NASA researchers may finally have cracked what causes the giant magnetic anomaly over the Atlantic, though the consequences of both its movement and its splitting in two have yet to be fully determined.

The area of dramatically weakened magnetic field strength is known as the South Atlantic Anomaly (SAA) and stretches from western Africa to South America. While it poses no direct threat to us here on Earth, it does put satellites and spacecraft in orbit at risk, which is why NASA is so keen to figure out exactly what’s going on.

In a new video, the space agency details everything we know so far about this strange phenomenon.

Described as a ‘dent’ in Earth’s magnetic field, or a kind of ‘pothole in space’, the SAA can and often does interfere with spacecraft, including the International Space Station, and satellites in low-Earth orbit which pass directly through it.

The systems on board can malfunction and short circuit if struck by high-energy protons emitted from the Sun. While at first this may seem relatively minor, the stakes are far higher in the vacuum of space than in the comfort of Earth’s atmosphere.

These low-risk glitches could erase a plethora of data or potentially damage key components which would be extremely costly to replace. The risk is so great, in fact, that many satellite operators are forced to shut down altogether when they enter the anomaly’s area of effect.

NASA has revealed that, as many expected, the phenomenon is likely the work of our planet’s molten iron core, interacting with other vast natural structures beneath our feet.

Situated some 2,900km below the African continent, it interacts with and disturbs the magnetic field generated by the Earth’s core, which likely results in the dramatic weakening effect and creates this vast blob, with help from our planet’s axial rotation, of course.

“The magnetic field is actually a superposition of fields from many current sources,” explains geophysicist Terry Sabaka from NASA’s Goddard Space Flight Center.

While NASA has a highly plausible explanation for how the anomaly is formed, the complexity of the natural structures which create it are still little understood.

For now, scientists can only continue to monitor its north-westerly drift as it splits in two.

A study published in July found that the phenomenon is a recurring one and may have begun working its mysterious magic 11 million years ago or more, thereby reducing the likelihood that the SAA is a precursor to the flipping of the entire planetary magnetic field. 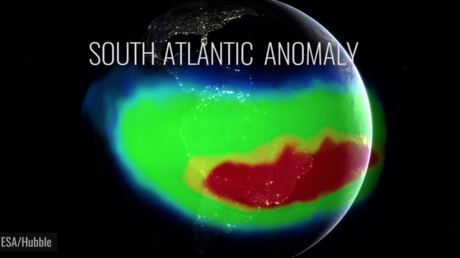