Astronomers researching the mysterious Fast Radio Burst (FRB) 121102 have confirmed that the powerful phenomenon has a predictable cycle, which may allow us to find out what exactly is causing it once and for all.

First discovered in 2012, the FRB is located in a dwarf galaxy 3 billion light-years away making it very difficult to monitor, requiring some of Earth’s most powerful instruments.

FRBs are intense blasts of radio waves which can release as much power as hundreds of millions of suns in mere milliseconds, but the majority of them that we have observed have flared once only to disappear, never to be heard from again.

This makes it extremely difficult to discover their composition, monitor their behavior and determine their source. In other words, they are extraordinarily difficult to study let alone predict as scientists have just managed.

A team led by Marilyn Cruces of the Max Planck Institute for Radio Astronomy, in conjunction with other research carried out at the University of Manchester by astronomer Kaustubh Rajwade, has unveiled their model for the FRB’s cycle.

For 67 days, FRB 121102 goes dark, not making any noise and effectively disappearing only to ‘wake up’ again for 90 days, producing these breathtaking millisecond radio flares that are so powerful we can see them billions of light-years away here on Earth.

According to Cruces’ prediction for the FRB’s repeating and predictable 157-day cycle, it’s current flaring phase will last from July 9 and October 14, 2020 before it hibernates once more.

Multiple international teams, including the National Astronomy Observatory of China which uses the Five-hundred-meter Aperture Spherical radio Telescope (FAST), will continue to monitor FRB 121102 to try and figure out what’s behind these bursts.

Now researchers all over the world have a specific timeframe in which to gather data before having a predetermined period for intense study without worrying they might miss some key detail or event.

Just a tiny few FRBs have been detected repeating and they will likely hold the key to unravelling the mystery once and for all and allow us to determine what’s really behind these phenomenally powerful blasts. The leading theory suggests that a certain kind of neutron star called a magnetar is responsible, but the mystery remains for the time being at least. 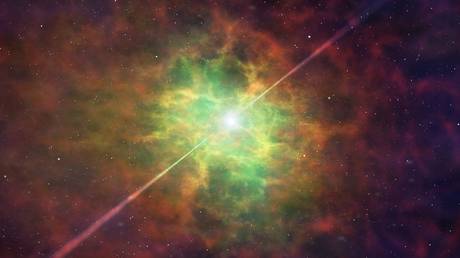