Demonstrators in Myanmar were shot at by law enforcement on Monday, local media reported, less than a day after 18 protesters were killed on what was the country’s bloodiest day yet since the military seized power on February 1.

Amid the violence, which reportedly took place until around midday, police removed barricades erected by protesters, while also deploying tear gas and firing shots at crowds on Insein Road, a central thoroughfare in the city.

In several unverified videos posted to social media, the military appeared to lash out with batons and fired at protesters, while loud bangs could be heard.

No casualties or arrests have been reported from Monday’s confrontations.

ရန်ကုန် – လှည်းတန်း – ကန်လမ်းနား
The military dictatorship has taken steps like a battlefield to shoot unarmed civilians. They fired with force.

Monday’s violence comes as Myanmar’s democratically elected leader Aung San Suu Kyi was seen for the first time since she and other officials were detained by the military on February 1. A court slapped further charges on the deposed leader, adding to her already-alleged crimes of using unauthorized walkie-talkies and of breaching coronavirus rules.

The total number of people killed since the recent coup rose to at least 23 after Sunday’s violence. In response to the killings, the US, which has already sanctioned Myanmar military officials, on Monday promised new action due to what White House press secretary Jen Psaki said was an “escalation of the ongoing crackdown.” 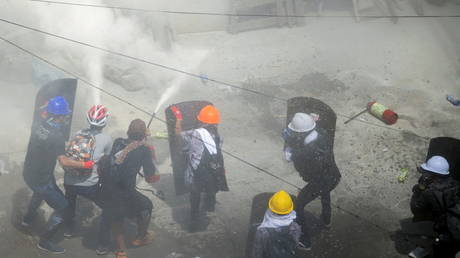