Denmark’s health ministry has said that the strain of coronavirus that mutated in mink and infected humans is “most likely” extinct, less than two weeks after a strict lockdown was put in place in the afflicted region.

In a statement released on Thursday, the Danish Ministry of Health declared that a new virus variant, which mutated in mink, had not been registered in the human population since September 15.

Following an assessment by the Statens Serum Institut, it was deemed that the variant, known as Cluster 5, has most likely become extinct in Denmark.

It is feared that the mutant strain of Covid-19 may reduce the effectiveness of the candidate vaccines being trialed.

All mink in the afflicted region have been culled and the government now has political support to euthanize all of Denmark’s 17 million mink. The government’s original order to cull the country’s mink was deemed illegal and led to the resignation of Agriculture Minister Mogens Jensen on Wednesday.

From November 9-15, the Danish authorities conducted a total of 73,228 tests in the afflicted North Jutland region and say the data shows the decline of the mutant strain in humans over the past month.

The health ministry announced that restrictions could now be relaxed in the area, including the reopening of bars and restaurants as well as restarting public transport from Friday. The measures were supposed to apply until at least December 3.

On November 5, Prime Minister Mette Frederiksen said that tough restrictions would be introduced in seven different North Jutland municipalities to eradicate the mutated variation of coronavirus, adding “the eyes of the world are on us.”

Concern over the spread of the mutant strain led other nations, including the UK, to introduce a total ban on visitors from Denmark.

Mink-related mutations have also been reported in the Netherlands, South Africa, Switzerland, the Faroe Islands, Russia and the US. 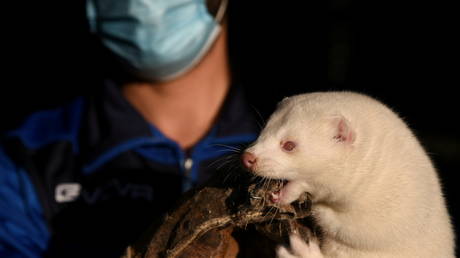 Covid means a ‘different’ but stil...