Motorist speeds over rainbow crosswalk in Vancouver, police call it a ‘hate gesture’

Motorist speeds over rainbow crosswalk in Vancouver, police call it a ‘hate gesture’

Police in Vancouver tracked down a driver who left tire tracks on a crosswalk. On the face of it, not an unusual occurrence, but as this crosswalk is a rainbow-colored pride walk, they considered the incident a “gesture of hate.”

Officers in the Canadian city heard a “loud and sustained tire squealing” outside their station on Tuesday afternoon, and went outside to discover the newly-installed “Pride crosswalk” had been “defaced” with tire tracks.

Footage published by local reporter Sonia Aslam showed a Ford Mustang peeling away from the intersection at speed, and police shared still images of the car, saying they’d “like to speak with the driver.”

A week after it was installed, the Pride crosswalk outside @WestVanPolice‘s HQ at 16th/Esquimalt Ave. was damaged by the car seen below. No one has been arrested. The crosswalk hasn’t been repaired yet. If you recognize the car below, tell police. pic.twitter.com/6NRnWoBpHa

Investigators would like to speak with the driver responsible for defacing a recently installed Pride crosswalk at 16th St. and Esquimalt Ave. If you have information, please call 604-925-7300. https://t.co/ywkNR4DMAv pic.twitter.com/ViW0ZxcxYN

Photos shared by the West Vancouver Police Department show one tire track left on the rainbow-colored crossing. Despite the lack of actual damage, police accused the driver of leaving “a gesture of hate on a crosswalk that stands for the exact opposite.”

Commenters quickly mocked the police. “How are tire marks vandalism?” one woman wrote. “It’s on a street, people drive over it.” The cops stayed stone-faced though, and again held up the narrow strip of rubber as proof of the driver’s misdeeds.

As the story spread, commentators came from far and wide to ridicule Vancouver’s finest.

I saw the suspect take off after yelling “yabba dabba doo.”

Hear me out on this… maybe don’t put symbols of Pride where it’ll be run over hundreds of times per day. 🤦🏻‍♀️ pic.twitter.com/H0qJ4pIoJp

lmao why should anyone be arrested for driving on the road?

However, some citizens evidently heeded the call for information. West Vancouver PD announced on Thursday that they had identified the driver, and thanked those who had come forward to help.

Rainbow crosswalks have become ubiquitous in liberal Western cities in the last decade or so, ever since they were first put down temporarily during gay pride festivals. Since then, some cities – like London and Sydney – have made theirs permanent, while others have gone one step further. Late last year, the Dutch city of Almere painted the world’s first “transgender crosswalk,” a decision that left commenters bemused.

Until the West Vancouver Police Department launched its manhunt this week, however, nobody seemed to mind the fact that crosswalks, by design, get driven over a lot. 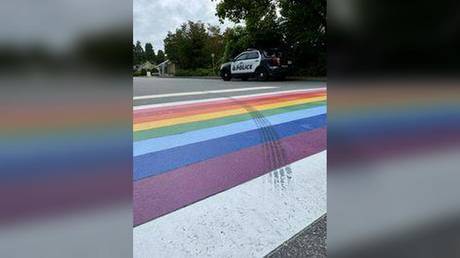