More than 100,000 evacuated as southwestern China stricken by worst floods in decades (VIDEO)

More than 100,000 evacuated as southwestern China stricken by worst floods in decades (VIDEO)

Authorities in China’s southwestern Sichuan province have raised the flood emergency alert to the highest level for the first time on record as local rivers broke their banks and flooded the cities, sparking massive evacuations.

Continuous rainfall has caused the worst flooding in Sichuan in some 70 years. More than two dozen of the region’s major rivers overran their banks with muddy swelling waters flooding urban areas. The streets of Leshan – a major provincial city located at the confluence of two rivers – have been almost entirely submerged by water.

Footage published by the Ruptly video news agency shows fields, streets and highways in the devastated city inundated by the floodwater. Locals can be seen crowding the flooded streets or navigating submerged sections on boats and improvised rafts.

More than 1,000 city residents were stranded on Fengzhou Island after the flood cut off road access. Emergency services had to deliver them food and water via helicopter as they suffered from supply shortages for nearly a day.

The floods also affected the Leshan Giant Buddha, an eighth century 71-meter tall stone statue situated outside the city. The waters reached the toes of the figure – the first in the history of modern China to be declared a UNESCO world heritage site – prompting police to take measures to protect the site.

Over 100,000 people have been evacuated from the various flood-afflicted areas of Sichuan province, according to the Chinese media. 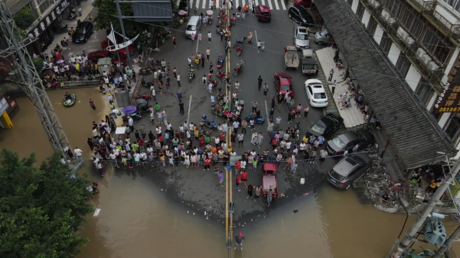