Mongolian authorities have locked down the city of Khovd and a region in the province of the same name, after two people tested positive for bubonic plague. They reportedly caught the deadly disease by eating marmots.

Two unidentified individuals contracted the “marmot plague” in the Khovd region, Mongolia’s National Center for Zoonotic Disease (NCZD) said in a statement on Wednesday. Local media reports said the victims were a man, 27, and a young woman of unknown age.

The NCZD said it traced 146 people who were in direct contact with the infected duo, and 504 more secondary contacts. They are currently analyzing samples from these individuals.

Khovd is in the western part of Mongolia, north of the border with China. A 2019 plague outbreak in a nearby province bordering Russia prompted the closure of a border crossing, stranding a number of Russian tourists. That outbreak was also linked to consumption of marmot meat and claimed the lives of two people.

Bubonic plague killed over 50 million people in Europe in the 14th century, but pockets of it remain around the world. According to the World Health Organization, there were 3,248 cases reported worldwide between 2010 and 2015, including 584 deaths. It is treatable with modern antibiotics. 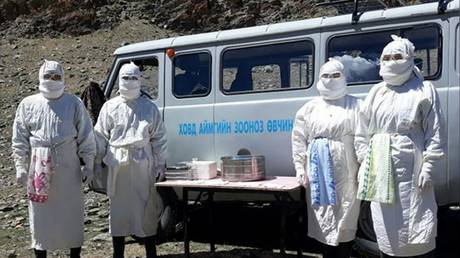 France ordered to pay up after epi...