Mexican first lady Beatriz Gutierrez has issued an apology and locked her Twitter account after her remarks about children suffering from cancer were slammed as insensitive and dismissive.

Gutierrez posted a tweet marking the two-year anniversary of President Andres Manuel Lopez Obrador’s electoral victory – but her celebratory mood was quickly dampened by a flood of questions and criticism directed at her husband.

“When will you personally attend to the parents of children with cancer? Thank you for your kind response,” read one reply.

Seemingly unmoved by the query, the first lady fired back: “I’m not a doctor, maybe you are. On you go, you help them.”

Her response was not well received, with anger over her comments quickly spreading across social media.

Outraged Mexicans launched the hashtag #LaBrujaDelPalacio (The Witch of the Palace), and Gutierrez’s name became a trending topic in the country.

Parents of children with cancer in the country demanded an apology from the first lady, and called for more “empathetic and humane” dialogue on issues concerning public health. Gutierrez’s husband faced criticism earlier this year after reports emerged detailing a shortage of medicines used for treating children with cancer.

The offending tweet was later deleted and Gutierrez issued an apology in which she took aim at her husband’s “inquisitive adversaries,” but stressed that she is “deeply human” and “wishes the best for everyone.” The backpedaling was perhaps too little too late, as the first lady ultimately chose to set her Twitter account to private.

The social media scandal comes just days after President Obrador claimed that Twitter was overrun with bots that were spreading fake news about his administration. 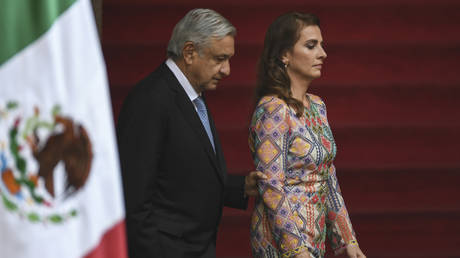