German Chancellor Angela Merkel has concerns that Twitter’s “problematic” suspension of Donald Trump’s account, in the wake of last week’s assault on the Capitol, is an encroachment on freedom of opinion, her spokesman said.

Steffan Seibert said on Monday that it was right for social media companies not to “stand back” when content inciting violence was posted online, such as by ‘flagging’ it, as Twitter has previously done to several of the US president’s tweets.

Merkel’s spokesman stressed, however, that the right to freedom of opinion is a “fundamental right of elementary importance,” which can be interfered with through the law and legislation, “not according to the decision of the management of social media platforms.”

“From this point of view, the chancellor considers it problematic that the accounts of the US president have been permanently blocked,” he told reporters in Berlin.

Twitter permanently suspended Trump’s account last week, citing the “risk of further incitement of violence” after thousands of the outgoing president’s supporters stormed the US Capitol building in Washington last week as Congress met to certify his successor to the presidency.

Facebook, Instagram and other social media platforms have also banned accounts belonging to Trump, purportedly over safety concerns that he could stoke unrest among his supporters during his remaining days in office. He is set to be replaced by Joe Biden on January 20.

The fallout from the riots at the Capitol has also seen Amazon follow Google and Apple in dumping social network Parler, which has become an increasingly popular platform among US conservatives, over what it called a “steady increase in this violent content” since Wednesday.

Besides Merkel, other global figures have pushed back at big tech’s apparent censorship of Trump in response to the Capitol violence.

Prominent Russian Senator Alexey Pushkov dubbed the situation a “diktat of internet giants,” while UK Health Secretary Matt Hancock said the bans on Trump had “consequences” and raised a “very big question” about the role of social media regulation.

Five people have been confirmed dead as a result of the riots, including a police officer who died from his injuries and a woman who was shot by police inside the Capitol. 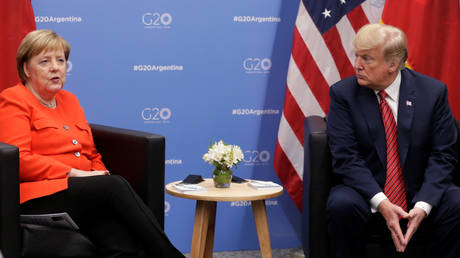