German Chancellor Angela Merkel has warned that the coronavirus pandemic will likely accelerate in severity in the coming months, and promised that her government would focus on social welfare and safeguarding the economy.

Speaking at her annual summer news conference in Berlin, the German leader said that her top priority was to ensure that the country doesn’t abandon its obligations to its younger generation.

The government will be “doing everything so that our children are not the losers of the pandemic. School and daycare need to be the most important things,” Merkel told reporters. She said that the European Commission is working on securing contracts with drug companies to provide Covid-19 vaccines for the bloc.

Merkel also stressed that keeping the economy going, and working to restore industries affected by the pandemic, was critical. She claimed that her government has “worked intensively for the protection of the individual and for the health system, but also for the economy.”

Last month Germany announced that its economy had shrunk by 10 percent quarter-on-quarter from April to June. The plunge erased almost a decade of growth, the country’s Federal Statistics Office said.

Like many countries, Germany imposed strict measures, including the closure of ‘non-essential’ businesses, in an attempt to stop the spread of the coronavirus. Although the country has seen an uptick in new cases, daily deaths remain low and its total number of fatalities is below 10,000. 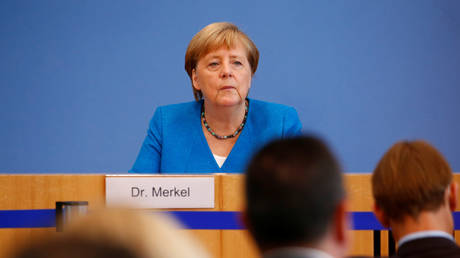 ‘Clock’s only ticking in Pompeo’s...