The emergence of new Covid-19 variants means continuous vaccinations against the virus over the next few years will be a way of life, German Chancellor Angela Merkel warned at a virtual summit of EU leaders on Thursday.

“Due to the mutations, we may have to be able to re-inoculate for several years,” she told the European Council meeting.

The chancellor also suggested that the UK variant was present in German areas currently seeing an increasing number of Covid-19 cases, and confirmed that the country would use internal border controls to curb the spread of new strains.

Merkel said that, by summer, the EU will likely have a vaccine passport scheme in place that would allow people to show they have been immunized against the virus, enabling them to travel abroad.

Plans for digital vaccination certificates are currently being developed by airlines and several countries, including Sweden and Denmark, as well as Iceland, which launched its scheme in January.

Also present at the summit was Italy’s new Prime Minister Mario Draghi, who warned of tougher action against pharmaceutical companies who renege on their agreed vaccine delivery times and quantities.

They “should not be excused,” Draghi said, and he also called for EU leaders to work more closely to ensure a speedy rollout of jabs across its 27 member states.

The bloc’s vaccine rollout plans have been beset by snags including shortages in projected deliveries of the Pfizer and AstraZeneca jabs, due to production issues. 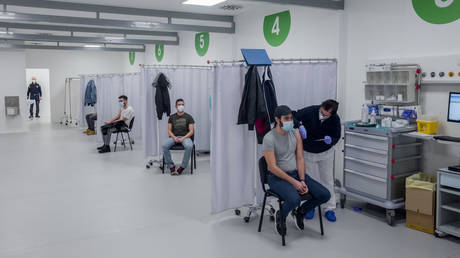