German Chancellor Angela Merkel has slammed outgoing US President Donald Trump over his long denial of his election defeat, saying that the political uncertainty led to violence on Capitol Hill.

Speaking on Thursday in a closed party meeting, Merkel said the images of people storming the US Capitol Building made her “angry and also sad,” adding that she felt like “most friends of the United States of America.”

The chancellor said that in any election there are winners and losers, but “both have to play their role with decency and a sense of responsibility so that democracy itself remains the winner.”

This democracy will prove to be much stronger than the aggressors and rioters.

Merkel said she lamented the outgoing president’s role in the occupation of the Capitol.

Trump had “unfortunately” not admitted his defeat by Wednesday. It is only because doubts were raised about the outcome of the election that “the atmosphere was created in which such violent events were possible,” she said.

The chancellor’s comments come after other world leaders, including UK PM Boris Johnson, condemned Wednesday’s violence and called for the “peaceful and orderly transfer of power.”

Meanwhile, on Thursday, the outgoing president promised “an orderly transition,” after the US Congress certified Joe Biden’s victory.

“Even though I totally disagree with the outcome of the election, and the facts bear me out, nevertheless there will be an orderly transition on January 20th,” Trump said in a short statement. 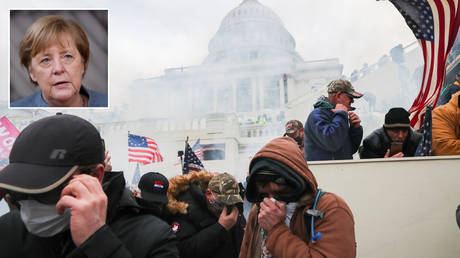 Germany may set up special fund to...