Protesters have taken to the streets in downtown Berlin to denounce a bill that would enshrine lockdown measures into German law. The police detained several people and deployed water cannons when the crowd refused to leave.

Thousands have gathered at the iconic Brandenburg Gate, which is located in the heart of Berlin, near the country’s parliament building, the Bundestag. Protesters held signs reading “Wake Up,” “Free Speech,” and “For Enlightenment. Peace and Freedom.”

One person carried a banner with the words “Merkel must go, democracy must stay!” referring to Chancellor Angela Merkel.

Barricades were set up to prevent protesters from getting too close to the Bundestag. The police were filmed detaining several people.

Officers complained that some demonstrators were violating Covid-19 restrictions by not wearing masks, and warned that “the use of water cannon cannot be ruled out” if they had to disperse the crowd.

Water cannons were later deployed when protesters refused to leave.

Officials had previously rejected a dozen applications to rally outside the parliament building. In a letter to MPs obtained by the media, the police warned about possible “attacks” on the Bundestag. There were attempts to break into the building during a similar demonstration in August.

#BREAKING: Police are now using water cannons against demonstrators who demonstrating against #Merkel‘s government and its #Corona policy in #Berlin!#Protect2020 #b1811 #germany #Be1811 #b1711 #berlindemo #Demoberlin #Demo #Covid_19 #Covid #COVID19 #coronademo #coronavirus pic.twitter.com/o4CBxHtXgm

Lawmakers are expected to pass a bill on Wednesday that would write a long list of concrete quarantine measures, such as mask-wearing and social distancing rules, into the country’s existing law on protection from infections.

The government argues that the change is necessary if there is to be a robust response to the Covid-19 pandemic. Critics say the bill was put forward in a rushed manner and would give the government too much power in regulating the lives of ordinary people.

Germany has been living under a month-long nationwide lockdown since November 2. People are being encouraged to stay home, restaurants and bars remain closed, and public meetings are limited to just two households of up to 10 people in total. The tougher measures were introduced in response to the growing coronavirus infection rate. 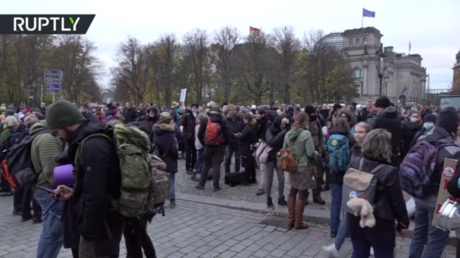