Germany’s Chancellor Angela Merkel was stunned by brutal attacks on police and large-scale looting in Stuttgart over the weekend, calling the actions of the rioters – who numbered in the hundreds – “abhorrent.”

“Whoever has done this has turned against their city, against the people with whom they live and against the laws that protect us all,” Merkel’s spokesman, Steffen Seibert, said about the disturbances in the capital of southwest Germany’s Baden-Wurttemberg state.

Earlier on Monday, German President Frank-Walter Steinmeier called for the perpetrators to be “prosecuted and punished with all the severity of the law.” The government must oppose anyone who attacks police officers or “gives the impression that they should be ‘disposed of’,” he pointed out.

Apparently inspired by the George Floyd protesters in the US, several hundred people clashed with police and looted shops in center of Stuttgart early on Sunday. The riots broke out as the police were carrying out checks in relation to a drug-related crime, resulting in more than a dozen officers getting injured and two dozen people – half of them German nationals – being arrested. 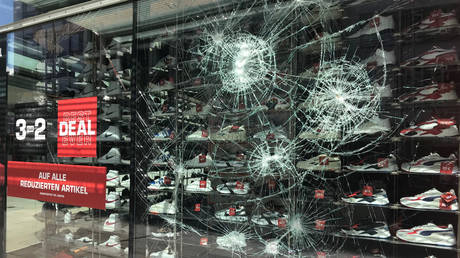 China denies it made US diplom...