A member of India’s Dalit community has been sworn in as the chief minister of Punjab state, marking the first time that someone from the lowest caste has achieved top office in the north-western province.

On Monday, Charanjit Singh Channi was sworn in as 16th chief minister of Punjab in a small ceremony, reportedly only attended by some 40 people, including MP Rahul Gandhi, who leads the opposition Indian National Congress (INC) party.
Channi, a Sikh, is the first member of the Dalit community to become chief minister of the state which borders Pakistan.

The 58-year-old was chosen to succeed Amarinder Singh on Sunday after his resignation on Saturday. Channi, like his predecessor, is a member of Gandhi’s INC.

The new chief minister struck an emotional tone at his swearing in. “We once didn’t have a roof in our house, my mother & I used to get mud to plaster our walls,” he said, according to a translation provided by INC Congressman Gaurav Pandhi. Channi added that it was thanks to the INC and Gandhi that he was here today being sworn in as chief minister.

The move has been widely reported in India as an attempt by the INC to win votes from the Dalit community, which represents around a third of the population in Punjab.

Indian Prime Minister Narendra Modi (Bharatiya Janata Party) shared a message of support to Channi, congratulating him on being sworn in as Pubjab’s chief minister. “Will continue to work with the Punjab government for the betterment of the people of Punjab,” he wrote.

Channi is not the first Dalit person to hold such a post in India, while the current President Ram Nath Kovind is also from the same community. Still, the Dalit community, once called ‘the untouchables’ remain massively underrepresented amid continued persecution.

Over the past year there has been a reported 9.4% increase in the number of crimes committed against Dalits, equating to a crime every 10 minutes, according to the National Crime Records Bureau. 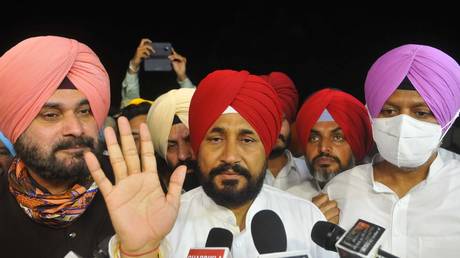 ‘Honeymoon is over’: Ronaldo roasted as ‘dreadful’ & Solskjaer slammed as Man Utd fall to ‘embarrassing’ loss at Leicester City