Mounted police used teargas and truncheons to disperse a crowd of several thousand protesters gathered outside the Serbian parliament in Belgrade, opposed to the government’s announcement of a new coronavirus lockdown.

President Aleksandar Vucic announced on Tuesday that a new curfew would go into effect on Friday and last over the weekend, after 300 new Covid-19 cases and 13 deaths – the most since the pandemic began, local media reported.

🇷🇸#Belgrade: The crowd outside of the #Serbia|n parliament right now protesting #COVID19 mandates. Earlier hundreds had stormed inside the building before they were driven back by police. pic.twitter.com/8IbxNrT1l3

This prompted an estimated ten thousand people to gather outside the parliament building and demand Vucic’s resignation, starting around 10 pm local time.

After some demonstrators reportedly broke into the building, riot police were deployed and used force to disperse the crowd, including tear gas. At one point, police on horseback charged the demonstrators.

Opposition politicians tried to direct the protests into a revolution against the government, urging all of Serbia to “go to Belgrade, now or never!” and telling people to “seize their freedom.”

Former foreign minister Vuk Jeremic appeared among the demonstrators at one point, before he was told to “go away” and received a slap upside the head.

#BREAKING Serbia
Former-opposition leaders quarreled and received a blow to the head ‼️pic.twitter.com/ItmepTx7I2

The protest may have started over Covid-19 restrictions, but its participants appeared to be motivated in part by frustration with Serbia’s politics, often denouncing Vucic as a “NATO lackey” and his government as a “colony.”

Journalist Boris Malagurski, who has been critical of the government, posted a photo of the protest with the caption “Serbia has risen.”

Many of the protesters were young. One young man told reporters he was there because his father died of the virus due to lack of ventilators. An older man, with blood flowing down his face, said he was a father of two fighting for a better future for his children – possibly a comment on “For our children,” the ruling Progressive party’s slogan in last month’s parliamentary election.

Vucic’s party won a commanding majority, with a turnout just below 50 percent. The president himself has not commented on the unrest, while Prime Minister Ana Brnabic said that police would “restore order.”

Serbia imposed one of the strictest lockdowns in Europe starting in mid-March, turning to Russia and China for help after the EU blocked Belgrade from buying medical supplies. Easter was canceled, and the elections scheduled for late April were postponed to June. The state of emergency and the lockdown were lifted on May 6, but masks, social distancing and other mitigation rules have remained in effect.

Tuesday’s demonstrations were the largest such protest in almost a decade. Serbs have been reluctant to organize mass protests since the October 2000 ‘color revolution,’ which turned out to have been a regime change operation backed by the US.

Only a few hundred people remained in the park outside the parliament as of 1 am, before the final cavalry charge forced them several blocks back. 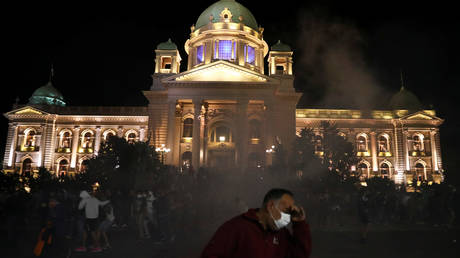 No10 serves Michel Barnier fish at...