Hundreds of migrants from Honduras have clashed with Guatemala’s stick-wielding soldiers after a large caravan breached the country’s border en route to the US.

Video from the scene shows migrants desperately attempting to push through a thick formation of soldiers blocking a road near the village of Vado Hondo in eastern Guatemala. A large group manages to break through the ranks, however, stick-wielding soldiers quickly intercept the majority of them and beat them back.

Three groups of around 3,000 people each managed to cross the Guatemalan border from Honduras on Friday night and Saturday, pushing through police lines and border guards. They then formed a caravan, hoping to cross into Mexico and reach the US border.

Most of the migrants entered without showing a negative Covid-19 test, which Guatemalan authorities require.

Guatemalan President Alejandro Giammattei’s spokesperson, Patricia Letona, told reporters that the caravan has entered the county “by force,” in violation of the state border laws.

The country’s government called on Honduras to “contain the mass exit of its inhabitants through preventive actions on a permanent basis.” Central American nations must “avoid putting their inhabitants at risk amid the health emergency due to the pandemic,” the statement said. 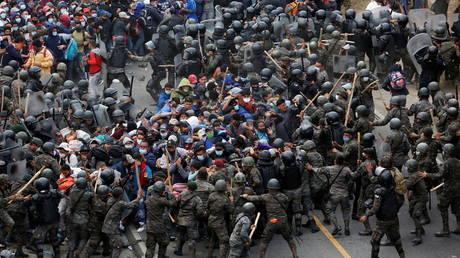