Authors Stephen King and Margaret Atwood are among hundreds of writers who added their names to an open letter in support of trans rights, following other artists’ defense of JK Rowling, who was targeted by trans activists online.

The letter is the “companion” to an earlier message of trans support from the UK and Ireland last week that was signed by more than 200 writers and publishers.

The pair signed the letter drawn up in response to a missive defending Rowling in The Times in late September, which was signed by a group of 58 high-profile names from the British arts world, including actor John Cleese and Booker Prize winner Ian McEwan.

The rival signatories had rallied around the Harry Potter author, who has been labelled a “trans-exclusionary radical feminist” and claims she has received “death and rape threats” due to her trans comments.

In June, Rowling ignited a firestorm online, when she spoke out against the non-gender-specific terminology used by and about the trans community, saying it erases the “lived reality of women globally.”

“I know and love trans people, but erasing the concept of sex removes the ability of many to meaningfully discuss their lives. It isn’t hate to speak the truth.”

With the publishing world remaining split over trans issues, the new letter had this week garnered more than 1,200 signatories in the United States and Canada.

In it, literary voices, which also include John Green and Roxane Gay, address the “trans & non-binary community” in the US and Canada, telling them: “Your pronouns matter. You matter. You are loved.”

The letter, which states that the signatories are “firmly in support of trans and non-binary people and their rights” reads: “We are writers, editors, journalists, agents, and professionals in multiple forms of publishing. We believe in the power of words. We want to do our part to help shape the curve of history toward justice and fairness.”

“To that end, we say: non-binary people are non-binary, trans women are women, trans men are men, trans rights are human rights.”

Author Maureen Johnson, who organized the North American support letter, said that, although “letters do not fix things”, they are intended to show support as well as bring awareness.

“In this case, the issue is transphobia in the publishing discourse and community,” she tweeted.

Rowling most recently drew criticism over her new crime novel ‘Troubled Blood’, which features a serial killer character who sometimes wears women’s clothing to snare his victims. The author previously enraged social media with a tweet in which she questioned a story that referred to “people who menstruate,” rather than calling them women. 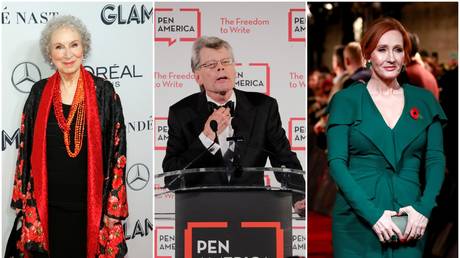 Chinese military urges US to stop...