Thousands have flocked to Buenos Aires to pay respects to football legend Diego Armando Maradona, who died Wednesday at the age of 60, but the influx of people to the presidential palace has caused officials to suspend the event.

Footage showed many thousands of people descending on the Argentinian capital to honor the late football great. But the mass gathering not only led to health concerns amid the Covid-19 pandemic, but also raised red flags over public safety.

Police were mobilised to help contain the massive crowd as more and more attempted to enter Casa Rosada, the official residence of the president where Maradona’s casket was being kept. As fans attempted to enter the government palace, erected fences were destroyed and multiple scuffles broke out with police. The crowd reportedly grew anxious when it was announced the ceremony would end early.

Footage from the scene shows police trying to hold people back with riot shields as projectiles are thrown at them. Rubber bullets and tear gas have also been deployed.

#Argentina: Right now, clash between the police and the fans of #DiegoMaradona during the farewell to their idol outside the Casa Rosada, the government palace.#MaradonaEterno #Maradona10 #CasaRosada

An RT Spanish crew suffered light injuries while covering the event after getting caught in the crossfire between unidentified stone-throwers and rubber bullet-firing police.

Maradona’s body is now reportedly being transferred to the Jardin Bella Vista cemetery.

Maradona passed away on Wednesday from cardiac arrest at the age of 60. He was recovering from brain surgery, which he has undergone two weeks prior to his death. 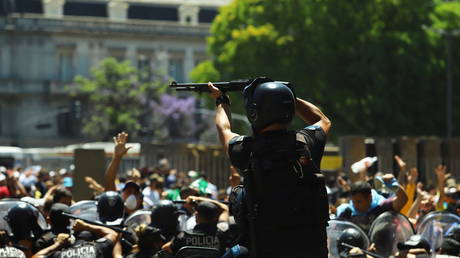