The Philippines taskforce for the South China Sea has reported incursions into its maritime territory by 287 Chinese militia vessels, one week after President Rodrigo Duterte questioned an international ruling in Manila’s favor.

In a statement on Wednesday, the National Task Force for the West Philippine Sea (NTF WPS) said that the Chinese vessels had been spotted on May 9 by a maritime patrol.

“This incident, along with continued illegal incursions of foreign vessels sighted near Philippines-held islands, has been submitted to relevant agencies for possible diplomatic actions,” the task force said.

The statement said that the Chinese vessels were scattered across reefs and islands in the Philippines-claimed municipality of Kalayaan, off the Palawan archipelago.

The NTF WPS also said that there were 34 Chinese vessels at the Juan Felipe (Whitsun) Reef, an area of serious contention between the states this year when a Chinese fishing flotilla moored in the bow-shaped reef for weeks, citing inclement weather. The Philippines Coast Guard said there were some 200 vessels involved.

Wednesday’s statement reiterated Manila’s claim to the reef, stating that it falls inside the country’s 200-nautical-mile exclusive economic zone (EEZ).

The NTF WPS also accused Chinese vessels of breaching Beijing’s own seasonal fishing ban in the region after sighting them harvesting shells inside the lagoon of Bajo de Masinloc, more commonly known as Scarborough Shoal.

The group’s report comes a week after Duterte suggested that a 2016 ruling by the Permanent Court of Arbitration, which ruled in favor of Manila over Beijing on disputed maritime territory, was just a “piece of paper” that he could throw out. The comment was made during an address by the president in which he pushed back on critics calling for him to be tougher on Beijing.

Islands and reefs in the South China Sea are hotly contested by China, the Philippines, Vietnam, Malaysia, Indonesia, Taiwan and Brunei. 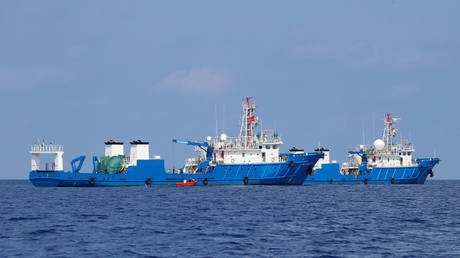 Boris Johnson will try to ‘strike...