A vast ‘life raft’ made of floating rock has made landfall in Queensland Australia, having emerged from an underwater volcano in the Pacific last year. Scientists believe it could resurrect portions of the Great Barrier Reef.

The fleet of floating pumice rocks, which at one stage was twice the size of Manhattan, emerged from the volcano dubbed ‘Volcano F’ or ‘0403-091’ which erupted last August near the Vavaʻu islands in Tonga.

The floating rock flotilla, which measured roughly 20,000 football fields in size and was six inches thick in most parts, made headlines around the world thanks to several viral videos showcasing the staggering extent of the natural structure.

Now it has completed its 3,000-km journey and made landfall in Australia, where it can begin work revitalising the Great Barrier Reef by delivering millions of reef-building organisms that have stowed away on board, providing what researchers are calling a “vitamin boost.”

“This is about a boost of new recruits, of new corals and other reef-building organisms, that happens every five years or so. It’s almost like a vitamin shot for the Great Barrier Reef.”

The rocks began arriving in April but the majority has now begun to make landfall, creating some jaw-dropping sights in the process, in what Bryan describes as a “very ancient process” which shows connections between coral reefs thousands of kilometers apart.

Bryan and his team have sent underwater robots with cameras and sampling gear to the volcanic source offshore of Tonga at several intervals and will continue to study the volcanic rock samples at source and destination to shed light on this ancient connection.

The researchers have so far identified over one hundred different species of organism attached to the pumice rocks, which will stimulate biodiversity on the reef and breathe new life into the beleaguered region.

The volcano itself is expected to transform into an island in the next few years. 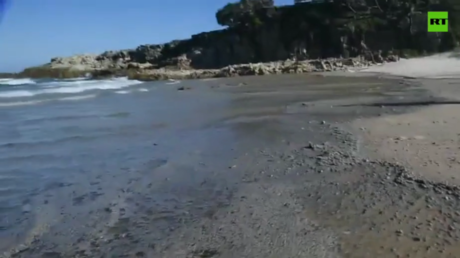 France to continue its Barkhane mi...