A knife-wielding man who attempted to attack police in a northwestern suburb of Paris has been shot by officers. The attacker allegedly shouted “Allahu Akbar”. No other casualties have been reported from the incident.

The attacker held “a knife in [his] hand” and threw a bottle at a group of police officers during a routine traffic check in the Parisian suburb of Colombes, a police source told Le Figaro. The man threatened the officers and shouted “Allahu Akbar”, the source added.

Police shot the attacker before he could approach them. The man, whose identity has not been revealed yet, was taken for emergency medical treatment but later succumbed to his injuries, French media reported.

The man was allegedly known to the police, but not to the security service tasked with handling radicals. There was also no file on him in the French database containing information on radical Islamists, a source told AFP.

A second investigation has been initiated to verify if there were sufficient grounds for the police to discharge their weapons. The suspect, reportedly aged 31, was previously known for customs, drug and road traffic offenses.

The police actions were commended by French Interior Minister Gerald Darmanin, who said in a tweet that he “salutes the coolness of the Colombes police officers.”

The minister added that France “must remain vigilant … more than ever.” 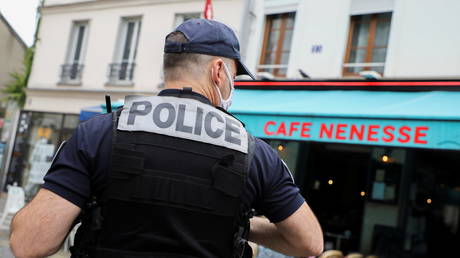