More Arabic will be taught in French schools and extra resources will be directed at studying the Muslim civilization, the country’s leader Emmanuel Macron said. The measures are part of the strategy to fight Islamic radicalism.

In his speech on Friday, the president highlighted the importance of preventing radicalization in the country’s Muslim communities. He said that “more Arabic language will be taught in schools or as part of extended day programs.” Macron explained that authorities must put an end to young people learning the language “from groups that offer them the worst and manipulate them.”

“Arabic, just like many other languages, is a treasure of our children, of their families,” Macron said, stressing that the state must support “the emergence of a better understanding of Islam.”

The president announced that the government will create the “Scientific Institute of Islamology” along with new positions in higher education to conduct research on “the Muslim civilization, the Mediterranean Sea region and Africa.” On top of that, more funding will go to the Foundation of Islam for France, which was established in 2016 to promote “progressive Islam,” according to its mission statement.

Aside from various outreach initiatives, Macron vowed to continue defending secularism as one of the key principles of modern France. He said that the government would prepare a bill that would strengthen a 1905 law that officially separated the church from the state. 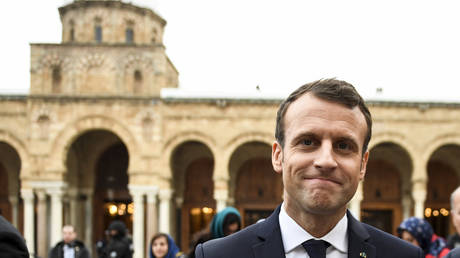 ‘Islam is in crisis all over the w...