Close
Trending News
HomeWorldMacron wants EU to back Belarusians standing up for ‘rights & freedom’. But what about the Yellow Vests at home? Twitter users ask

Macron wants EU to back Belarusians standing up for ‘rights & freedom’. But what about the Yellow Vests at home? Twitter users ask

Macron wants EU to back Belarusians standing up for ‘rights & freedom’. But what about the Yellow Vests at home? Twitter users ask

The French President called on the EU to throw its weight behind Belarusians demanding that their liberties be respected – but the online community was quick to remind him of fellow Frenchmen rallying for the same cause at home.

Emmanuel Macron tweeted his support for the growing anti-government sentiment in Belarus, writing on Sunday that Brussels must continue “to mobilize alongside the hundreds of thousands of Belarusians who demonstrate peacefully for the respect of their rights, their freedom and their sovereignty.”

The demonstrations that caught Macron’s eye have been building since the controversial presidential vote in Belarus, that saw the sitting President Alexander Lukashenko being re-elected for a sixth term. The outcome was rejected by the opposition, who insisted that the vote was rigged.

Notably, the French President’s appeal didn’t receive an overly positive response in the Francophone realm of Twitter. He took quite a bit of heat online for prioritizing grievances of Belarusians over those of the French.

“Haven’t you noticed that in France people also march for the respect of their rights?” one asked.

Another used the President’s language, reminding that “the Yellow Vests demonstrated, and still demonstrate peacefully today for the same demands, before you had them knocked down and clubbed.”

Initially motivated by rising fuel prices and unaffordable cost of living, the Yellow Vests evolved into a nationwide grassroots movement for economic and social justice. As it grew, political demands were added, with ‘Macron demission!’ (Macron resign!) becoming one of the slogans frequently heard at the Yellow Vests demonstrations.

Netizens wondered if Brussels will respond to the French rallies in the same manner Macron is calling for now.
“Has the European Union mobilized alongside the hundreds of thousands of Yellow Vests in France who peacefully demonstrated for the respect of their rights, their freedom and their sovereignty?” some asked.

People also pounded Macron’s page with examples of popular unrest in Europe and elsewhere which have attracted little or no attention from the EU. One Twitter user asked the president to express the same support for the people of Cote d’Ivoire, while another reminded him that in Catalonia, the EU “didn’t care about paramilitary violence against the civilian population.”

Macron’s tweet appears to be completely in line with the positions of the EU’s leadership. This Friday, the bloc dismissed Lukashenko’s victory and promised sanctions against Belarusian officials. Lukashenko himself brushed aside all calls to review the results of the election, repeatedly arguing that the wave of protests was orchestrated from abroad. 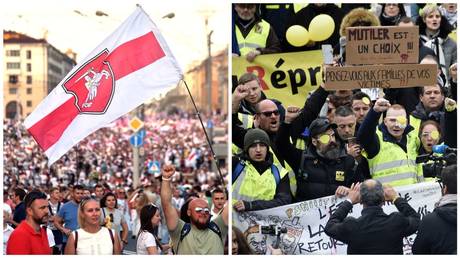