French President Emmanuel Macron has called on Israel to abandon its plans to annex Palestinian territories in the West Bank, describing the move as a violation of international law and damaging to regional peace.

In a telephone conversation with Prime Minister Benjamin Netanyahu, Macron warned that Israel’s stated intention of absorbing the territories would “compromise the possibility of a two-state solution” and undermines the goal of “lasting peace between Israelis and Palestinians.” He also reminded the Israeli leader that annexation would be “contrary to international law,” according to a statement released by the Elysee.

France’s ambassador to Israel previously cautioned that the unilateral action would have negative consequences for bilateral relations.

Macron’s protest comes amid vocal international opposition to Netanyahu’s annexation plans. The foreign ministers of Egypt, France, Germany said earlier this week that the move would be an affront to international law and would “imperil the foundations of the peace process.”

Their statement coincided with a warning from a senior adviser to Palestinian Authority President Mahmoud Abbas, who said that Israeli annexation of the West Bank would likely spark an all-out uprising among Palestinians. He predicted that the “intifada” would receive support from across the Arab world.

Last month, more than a thousand lawmakers from across Europe signed a statement condemning annexation as “fatal to the prospects of Israeli-Palestinian peace.”

Netanyahu originally wanted to begin annexation at the start of July, but his plans have been put on hold after facing internal and external pressure. The proposed annexation, part of US President Donald Trump’s peace plan for the region, would absorb around 30 percent of the West Bank. 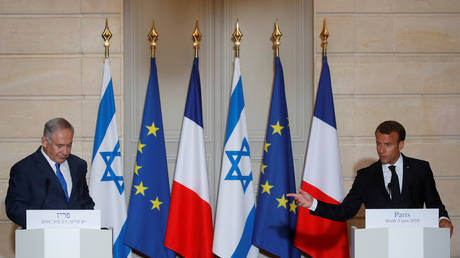