A lone armed robber has raided a branch of high-end jewelry store Chaumet near the Champs-Elysee avenue in central Paris, according to local prosecutors. The suspect escaped the scene with a lucrative haul and remains at large.

The brazen robber hit the luxury store late Tuesday afternoon. Footage from the scene shows the store cordoned-off with multiple police officers inside and outside the premises.

According to local media reports, the suspect arrived at the store on a stand-up scooter. The robber then threatened the tellers with a firearm before bagging a haul of jewelry and precious stones from the stunned staff.

While no estimates have been provided officially, initial media reports suggested the man lifted some €2 million ($2.37 million) worth of goods. No one was injured during the robbery, and the suspect fled the scene on his two-wheeled getaway vehicle. No description of the suspect has been released by French authorities, and the man remains at large.

The Paris prosecutor’s office has opened an investigation into the incident. 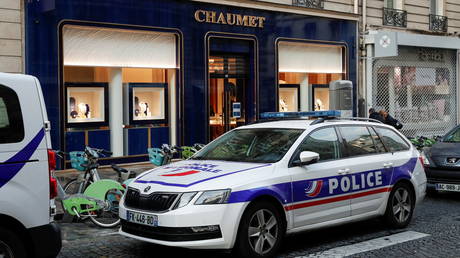