Belarusian President Alexander Lukashenko, who has been defiant in defending last week’s controversial election victory, has suddenly relented, saying new elections could be held – but only after a new constitution is adopted.

In a seeming about-face, Lukashenko told striking workers in Minsk that he would agree to a new vote – both parliamentary and presidential – but only after the nation adopts a new constitution via a referendum. He did not mention any specific time frame when it could happen, though.

Just hours ago, the newly re-elected president appeared set on sticking to his victory. During another rough face-to-face with workers, he said no other elections would be held unless he is “killed.”

The president’s comments come amid nationwide outrage over the election results. The first protests began immediately after Lukashenko’s victory was announced by election officials on August 9. Some demonstrations led to clashes with police, in which at least one person died.

The wave of public discontent has also spilled over to the nation’s major industrial sites, including renowned truck-making giant BelAZ, Minsk-based carmaker MAZ, as well as Belaruskali, the country’s largest exporter of potash fertilizer. The massive strikes prompted Lukashenko to hold some meetings with workers.

The country’s opposition media was quick to describe the events as a nationwide strike. Yet, the government downplayed these reports by saying that only a portion of workers were taking part in the industrial action.

Opposition leader Svetlana Tikhanovskaya, who fled to Lithuania in the wake of the protests last week, said earlier on Monday that she is ready and willing to take the role of an interim leader in case new elections are held. 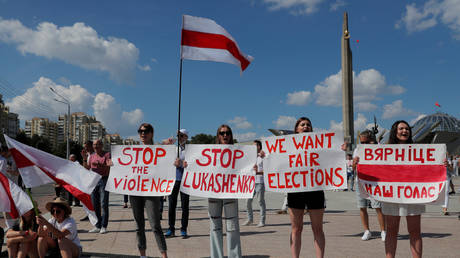