Close
Trending News
HomeWorldLukashenko declares he is ‘still alive’, amid mass protests at factories throughout Belarus

Lukashenko declares he is ‘still alive’, amid mass protests at factories throughout Belarus

Lukashenko declares he is ‘still alive’, amid mass protests at factories throughout Belarus

Pressure is ramping up on the Belarus government, as thousands of workers across the country staged protests on Friday denouncing the police crackdown and President Lukashenko laments the economic impact of looming strikes.

Photos and videos from across Belarus showed thousands of people in work clothes and hard hats taking part in protest rallies instead of manning production lines. They were chanting anti-government slogans and demanding action from their managers and local officials in response to the crackdown the government launched against the demonstrators during the past week.

As on the previous day, some of the country’s biggest manufacturing plants have been affected by the mass display of discontent. Protests were reported at fertilizer producer Grodno Azot, automaker MAZ, heavy off-road vehicle producer MZKT and many others.

While seemingly downplaying the consequences of the protests, the Belarus government has acknowledged the potential damage that worker discontent may inflict on the country’s economy. President Alexander Lukashenko, the main target of the protest, warned that even short strikes at factories will play into the hands of the competition.

“If [workers at potassium producer Belaruskali] go for a two-day strike, the competitors in Russia and Canada will make a cross sign and supply to the market everything they want,” the president said during a government meeting on Friday. The plant is among those where protest rallies have been reported.

Another sign of the seriousness of the situation is Friday’s visit of Prime Minister Roman Golovchenko to the Minsk Tractor Works (MTZ). Just two days ago, the official was assuring the public that “people simply want to work,” and said that predictions of strikes were meant to perpetrate “a myth of destabilization” in Belarus.

Managers of the plants said that, despite the rallies, they remain operational, contrary to what the opposition media claims. But the tension there is palpable, and there is no telling if the situation could soon escalate into a national strike, as some anti-government activists advocate.

The Belarusian president reacted to the pressure from the opposition, grimly joking at the meeting that he was “still alive” and had not fled the country, despite the wishes of his critics. He reiterated that the core of the protest consisted of rent-a-mob activists, and that honest wage-earners had better things to do than joining them. Lukashenko touts himself as a leader of the working people, and ensuring their prosperity and losing their support would seriously damage his image.

The government made several concessions on Thursday, with top officials apologizing for excessive use of force by the police and promising to release all those rounded up during the crackdown.

Mass protests flared up in Belarus after the election held last Sunday, which Lukashenko won in a landslide, according to official results. Opposition say the poll was rigged and took to the streets, triggering a heavy-handed response by law enforcement agents. 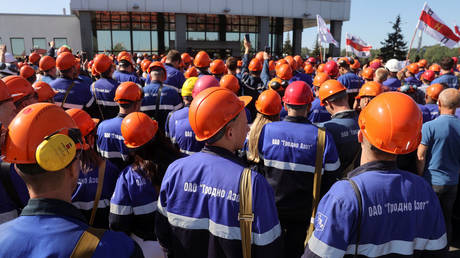