US Secretary of State Mike Pompeo has demanded that Beijing release two Canadians, calling espionage charges against them “politically motivated.” They were apprehended following Ottawa’s arrest of Huawei’s CFO on the US’ behalf.

“These charges are politically motivated and completely groundless,” Pompeo said in a statement on Monday, referring to the espionage charges filed last week against Canadians Michael Kovrig and Michael Spavor by the Chinese government.

While the men were taken into custody in December 2018, prosecution of their cases only formally began on Friday, entering the “legal review” procedural phase in the Beijing and Dandong courts.

Kovrig, a former diplomat working for the International Crisis Group in Hong Kong at the time of his arrest, has been accused of “gathering and stealing secrets and other intelligence for a foreign power.” Spavor, a businessman who organized trips to North Korea, was said to be providing Kovrig with “sensitive information and other intelligence.” Both were said to be engaging in “foreign espionage” and “providing state secrets.”

Pompeo affirmed that the US “stands with Canada” in calling for the pair’s release. Washington “rejects the use of these unjustified detentions to coerce Canada,” he continued.

The two men were taken into custody shortly after Huawei CFO Meng Wanzhou was arrested by Canadian authorities in transit at a Vancouver airport as she attempted to catch a connecting flight to Mexico. China has denied any relationship between the charges against the Canadians and Meng’s detention.

The US has sought to extradite the telecom executive in order to charge her with sanctions violations and fraud, accusing her of stealing trade secrets and fraudulently circumventing US trade restrictions to do business with Iran.

China has accused Washington of politically motivated prosecution of its own, claiming the “persecution” of Meng is meant as an attack on Huawei, part and parcel of an ongoing effort by the Trump administration to sabotage its competitiveness in the tech industry.

The Chinese exec’s lawyers have sought to have the extradition request denied, pointing out that Canada repealed its sanctions against Iran in 2016 and thus the alleged violation of US sanctions is not a crime in Canada. Ottawa requires the standard of “double criminality” be met in order for extradition to proceed. However, a Vancouver judge last month ruled that fraud, not sanctions violation, was at the core of the case.

Meng remains free on bail in Vancouver but is subject to electronic monitoring.She has in turn filed a civil suit against the Canadian government, alleging unlawful arrest and accusing Canadian officials of acting as “agents” of Washington in detaining her.

Earlier this month, Meng’s lawyers sought a stay in her extradition case, arguing it was based on “deliberate and/or reckless misstatements of fact and material omissions” and therefore a “serious abuse of the extradition process.”

The Chinese Embassy has accused Ottawa of serving as an “accomplice” to the US in Washington’s ongoing trade war. Relations between China and Canada have deteriorated noticeably since Meng’s arrest, with Beijing blocking billions of dollars in Canadian agricultural exports. Canadian PM Justin Trudeau called China’s decision to charge Spavor and Kovrig “extremely disappointing.” 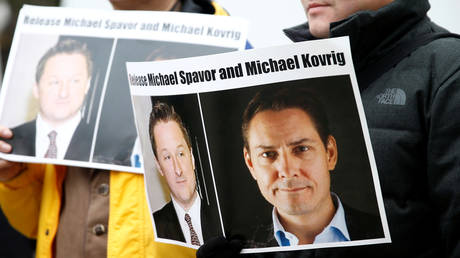