Footage shows a massive swarm of locusts invading the Indian city of Gurugram, located just southwest of New Delhi. The cloud of insects is a rare sight in the city – a posh financial and technology hub.

The locusts descended upon the streets of Gurugram on Saturday, flying in a large, cloud-like mass and resting upon anything they pleased. The invasion was anticipated, and the local authorities urged residents to close their doors and windows beforehand.

Swarm of locusts in Gurugram now.. flying past the metro station .. ok then #2020 #locustswarms #Gurgaon pic.twitter.com/awhnhpoQEl

In some locations, they resemble a cloud of grayish smoke.

Gurugram is a satellite city of the Indian capital, New Delhi, bordering the international airport. The locust invasion prompted an alert for pilots, who have been urged to be particularly careful when landing and taking off.

Locust swarm blanket city in India.
People living in Gurugram near New Delhi shared videos and photos as thousands of locusts covered the city. Authorities warned of the impending swarm on Friday, calling on residents to lock their doors. pic.twitter.com/qMyfXQrfGE

This is the first time the locusts have swarmed into the financial and tech hub, as they usually prefer rural areas, local media reported. The invasion prompted fears that the swarm might head to the capital next.

India has been hit by a massive infestation of locusts, affecting at least seven states in the northern, central, and western parts of the country. The government has deployed vehicles, including fire engines and helicopters, to spray insecticide.

Luckily, the infestation comes during the lean season – a gap between the harvest and planting season, but the summer crops might be in danger if the locusts are not properly dealt with. 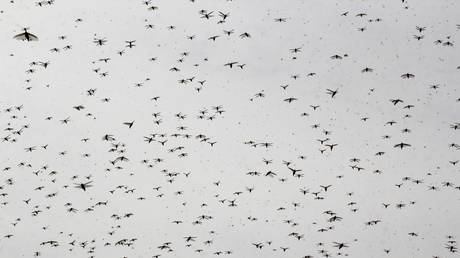