At least 107 people have been killed in lightning strikes in northern India, as the monsoon season continues to rage and the country’s meteorological department issues fresh ‘red alerts’ of thunderstorms and heavy rain.

Lightning struck numerous districts across the northeastern states of Uttar Pradesh and Bihar during heavy storms on Thursday. The majority of the victims were farmers working in the paddy fields when the squall hit, state disaster management officials reported.

Thunderstorms have so far claimed the lives of 83 residents in the Bihar region alone, and over 20 more died in the surrounding areas. Dozens of people were admitted to regional hospitals with severe burns, putting emergency departments under serious pressure, as the monsoon destroyed homes and felled electricity poles and trees.

The death toll is among the worst daily death tolls inflicted by lightning in the state for years, Bihar’s Disaster Management Minister Lakshmeshwar Rai told the AFP news agency.

The India Meteorological Department has issued a red alert for thunderstorms in Bihar and areas further east of the north Indian state, and also warned of further falls of heavy weather for the next three days. Bihar’s government has issued an appeal asking people to remain indoors until June 29.

Southwest Monsoon has further advanced into some more parts of Rajasthan, remaining parts of Uttar Pradesh and Himachal Pradesh,entire Delhi, some parts of Haryana and most parts of Punjab. pic.twitter.com/0ulftNJ5zr

India’s Prime Minister Narendra Modi and Defense Minister Rajnath Singh expressed their condolences to the families of the storm victims on Thursday, and said that relief work is underway. Bihar’s chief minister announced that 400,000 rupees ($5,300) compensation would be paid to the relatives of the deceased.

In India, more than 2,500 people die every year due to lightning, which is a common phenomenon during the monsoon season, from June to September. However, the death toll in the Bihar region so far in 2020 is almost twice as high as in previous years. Climate experts believe that the thunderstorms’ severity and frequency are expected to increase still further, due to increasing global temperatures. 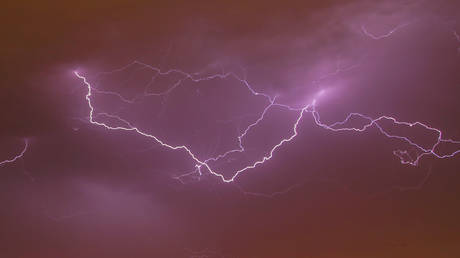