One of the two dueling parliaments in Libya passed a motion of no confidence in the unity government. The UN earlier warned that a civil war could resume if rivals don’t agree on a legal framework for the December election.

The Tobruk-based House of Representatives (HoR) said its members voted to withdraw confidence in the unity government. Out of 113 lawmakers present, 89 supported the move, a statement on its website read.

The HoR earlier said it will form a committee to investigate the government’s conduct and a separate committee to study the legal framework for the general election, scheduled for December 24.

Formed under a peace deal in March 2021, the Government of National Unity was supposed to oversee the election that would end the war between factions in the east and the west of the country. But the prospects of the vote have become uncertain due to disagreements over election law.

On Monday, the Tripoli-based High Council of State rejected the election law previously ratified by the HoR and called for the elections to be postponed.

The UN, however, warned that conducting the parliamentary and presidential elections as planned is crucial to maintaining peace in the country. The UN mission in Libya said this month the delay or cancellation of the vote may lead to renewed violence.

Libya has been broken into warring factions since 2011 when its longtime leader Muammar Gaddafi was toppled and killed in an uprising backed by a NATO aerial bombing campaign. 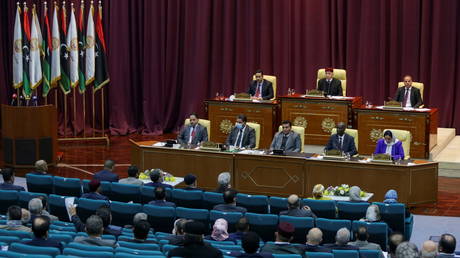 Britain WON’T be plunged into fresh Covid lockdown but No10 is ‘concerned’ about rising cases, admits minister