The two parties to Libya’s long-lasting civil war have reached an agreement on holding nationwide elections in 18 months, the UN envoy to Libya has announced, calling it a “breakthrough” in the protracted peace process.

“There’s real momentum and that’s what we need to focus on and encourage,” Stephanie Williams, acting special representative of the UN Secretary-General in Libya, said during a news conference after a round of talks between 75 UN-picked Libyan participants in Tunisia.

The representatives of the internationally recognized Government of National Accord (GNA) and Khalifa Haftar’s Libyan National Army (LNA) have been meeting since Monday and have eventually come up with a preliminary agreement on a roadmap to “free, fair, inclusive and credible parliamentary and presidential election.”

On Thursday, the representatives are expected to try and find a way to form a unified transitional government that is expected to oversee the run-up to the elections. Its “prerogatives and competencies” will particularly be discussed during the event, Williams said.

On the same day, a joint military commission created by the two sides will hold a session in the Libyan city of Sirte to advance the existing truce and adopt proposals for both sides to withdraw its forces from the frontlines.

The talks follow a “permanent truce” agreed by the GNA and the LNA in Geneva in October. Libya has been plunged into chaos since 2011 when a bombing campaign led by NATO helped militant groups topple its long-time ruler, Muammar Gaddafi.

Since 2014, the nation has been split between the GNA that controlled its capital, Tripoli, and the LNA that held sway over vast territories in the east of the country. Haftar-led forces launched an assault on Tripoli in April 2019, which ended in June 2020, after Turkey intervened in the conflict. 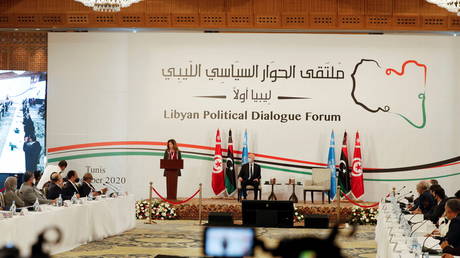 Government’s own adverts to boost...