The appointment of a conservative anti-LGBT crusader to head Poland’s education and science ministry has caused a meltdown among the country’s opposition and will likely intensify Warsaw’s stand-off with Brussels.

Przemyslaw Czarnek, a professor at the Catholic University of Lublin, who has a long record of incendiary statements on gay rights, is part of the new cabinet presented on Wednesday after a reshuffling of the government by the ruling Law and Justice (PiS) party. He now heads the newly created Ministry of Education and Science, which merges the functions of two previous ministries into one.

The politician is a veteran moral crusader against what is termed “LGBT ideology” by Polish conservatives. During the parliamentary election campaign this summer he told Poles to “stop listening to idiocy about some human rights or some equality,” adding that “these people are not normal people.” On other occasions, he has claimed there is “no doubt” that the “ideology” grew out of both Marxism and Nazi Socialism, and linked the sexual abuse of children by Catholic priests to homosexuality.

Czarnek’s appointment, which was reported by local media days before the official announcement, triggered an avalanche of condemnation from the Polish opposition. Radoslaw Sikorski, a Polish MEP and former foreign minister, branded Czarnek as a “homophobe, ignoramus and boor,” who will personify the intellectual level and background of the new cabinet. Deputy Speaker of Parliament Wlodzimierz Czarzasty called the man a “homophobic freak” in an interview.

The new minister, who previously served as a provincial head and an MP, has been a reliable source of controversy in Poland. So much so that the Onion-like website ASZdziennik, which publishes fake quotes of public figures for satirical effect, has made a habit of citing Czarnek’s actual words.

Some of Czarnek’s views on other issues have also been harshly criticized. He infamously penned a paper defending corporal punishment of school students, writing that “sometimes it is necessary to apply physical coercion” citing an old saying along the lines of “spare the rod and spoil the child” as his argument.

Czarnek claims that his detractors take his words out of context and promised to “pray” for the likes of Sikorski and Czarzasty. The words they used about him “are unworthy of politicians” and expose them as people with whom one cannot have a serious conversation, he said.

PiS won this year’s election on a platform of defending family rights and Christian values from the supposed scourge of “LGBT ideology” advanced by Western liberals. The campaign deepened the rift between Warsaw and Brussels, which lists fighting for gay rights among its primary goals and sees the developments in Poland as a setback for such causes.

Meanwhile, Polish politicians who have spared no words in criticizing this perceived threat have been elevated to high positions in the country. In August, the appointment of Zbigniew Rau as the new foreign minister sparked a similar uproar from opposition figures. In the past, he infamously accused LGBT activists of promoting euthanasia, pedophilia, zoophilia and cannibalism. 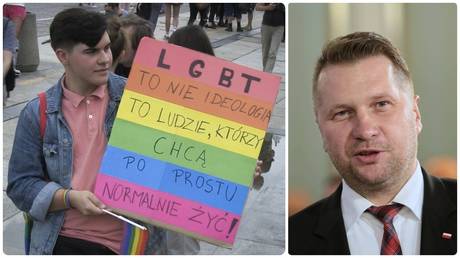