A Kiev-based LGBT group faced uproar online after unfurling the rainbow banner next to the hundred-meter tall Motherland Monument ahead of June 22 – the day the first Nazi bombs rained down on the city 79 years ago.

The stainless-steel Motherland Monument, erected in honor of the Soviet people who stood up en masse against the German aggression in WWII, was nearly defaced on Sunday by KyivPride activists.

Their action, intended to celebrate “equality for everyone,” saw a drone lifting a sizable rainbow banner toward the gigantic sword in the statue’s right hand. The copter hovered at such a height that it seemed like the LGBT flag was actually hanging on the sword.

Shot from different angles, the video was then uploaded to the group’s Facebook page, only to trigger an avalanche of criticism both offline and online.

Oleg Voloshin, an MP from the ‘Opposition Platform – For Life’, wrote he was left “speechless” by the stunt. “This is not just blasphemy – this is idiocy,” the lawmaker insisted, saying the activists “couldn’t have offended people more [than that].”

While foreign users wished “happy pride” to the group, Ukrainian- and Russian-speaking observers minced no words when commenting on the video. They were particularly enraged that the Motherland Monument was targeted just ahead of June 22, which is remembered as the date of the 1941 German invasion of the Soviet Union.

Kiev, as well as the whole of Soviet Ukraine, was fiercely bombed by the Luftwaffe during the opening days of the war to pave way for the ground troops’ advances.

“After all, this monument is tied to the fate of almost every family. Some died protecting their relatives, some returned wounded … And what kind of tribute they now receive?” one asked under the Facebook post.

“It’s not tolerance, it’s disgusting,” another wrote, asking if there are laws allowing to hold KyivPride accountable for “desecrating” the memory of the fallen.

Inaugurated back in 1981, Kiev’s Motherland Monument is thought to supplement the other two monuments dedicated to WWII, the famous Motherland Calls in Volgograd and the Soviet soldier carrying a German girl in East Berlin.

In the recent past, there have been calls from Ukraine’s nationalist camp to pull it down as part of the “decommunization” campaign – which oddly equates Soviet-era symbols to that of Nazi Germany – but to no avail so far. 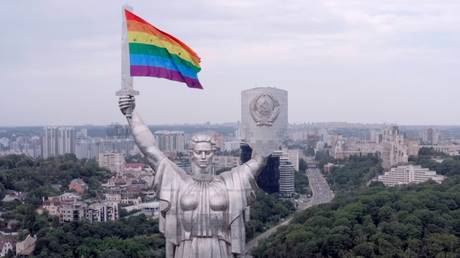